The Battle of Gumbinnen_1 was a  historical simulation game using miniatures and my (BR) modified MEM14 rules for World War One.


MEM14 was a modification of MEM44 (Richard Borg and Days of Wonder) and for a time was available on the INET for free. It has since been withdrawn probably because Borg just released a WW1 game  based on the successful MEM44 and and the other Command and Colors model. 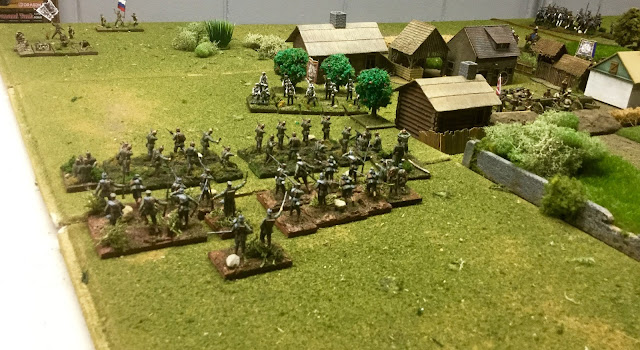 The German left flank consisted of the bulk of the 2nd ID. Pictured are four of the six battalions that were channeled between the board edge and fence line. The fence was a fog of war obstacle that limited the deployment area of the Germans. Historically, the 2nd ID arrived at the battlefield disorganized and the fence limitation surely represented that fact in the game. Pictured are three of the four Russian infantry battalions of the 109th Volga Regiment. Two have already suffered heavy losses and are retreating toward the board edge. A third battalion is making a stand in the small orchard that flanks the town. The fourth battalion would take cover within the building closest to the Germans. Although the 109th Volga Regiment was shot up they managed to hold Mallwischken nearly destroying a German regiment in the process. 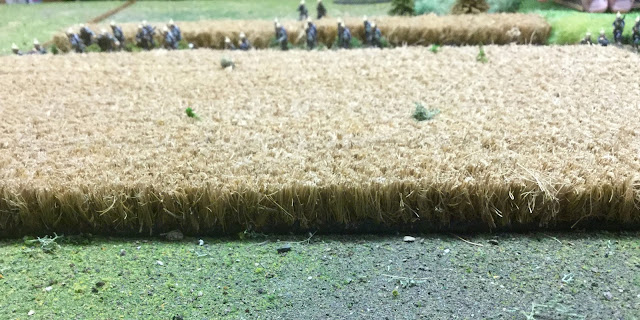 Germans from the 1st ID advance through a wheat field in the middle portion of the board. 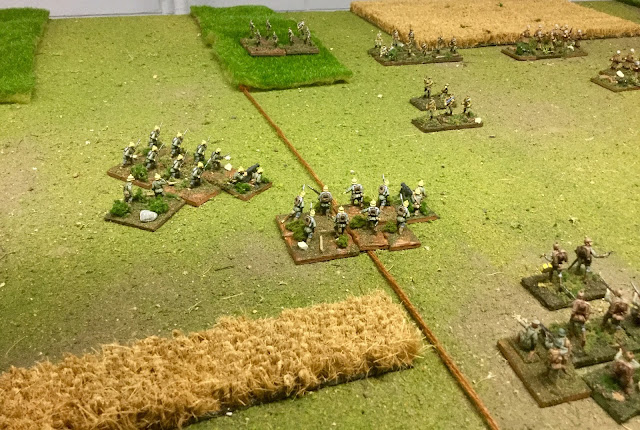 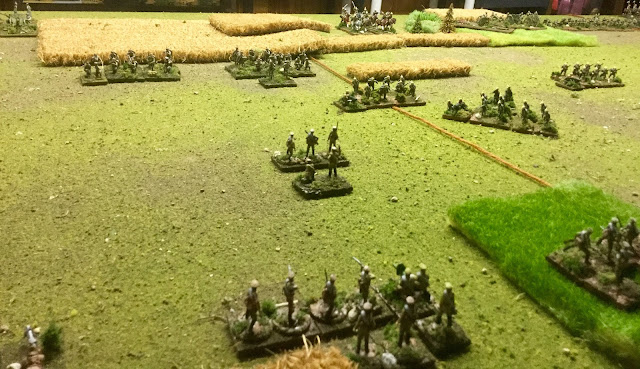 Same area from the Russian point of view. The German center\right did well but it was too little too late. (The thread is a visual marker that divides the game board into right and left flanks and center. Cards are played that activate units within designated areas.)

The scenario is part of a three game (minimum) campaign. This meant that while the Russians held both flank positions the troops in Mallwischken would be cut off. To keep them out of the next phase the bulk of the German 2nd ID must keep them bottled up in Mallwischken. 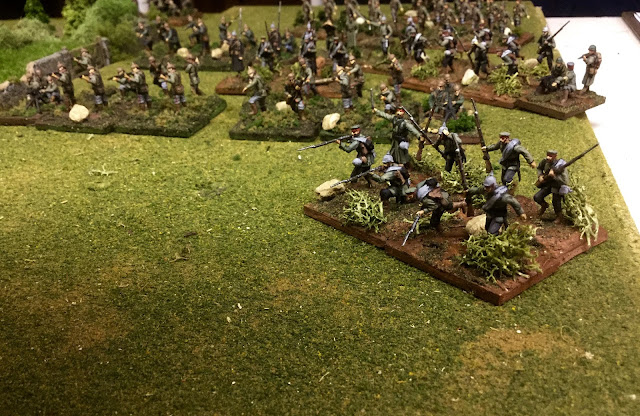 This picture returns us again to Mallwischken. The Germans have arrived disorganized but even so have concentrated a considerable number of battalions in their attempt to take the town. 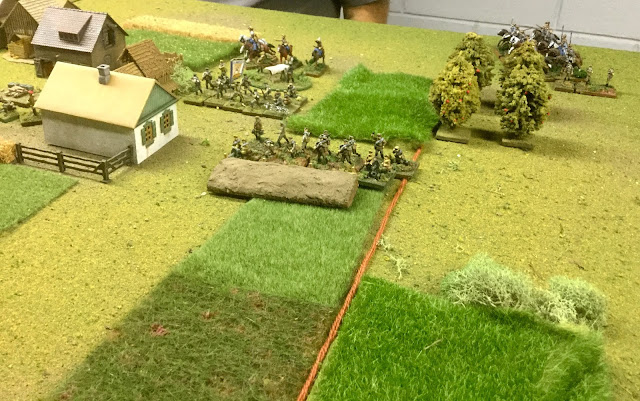 Elements of the Russian 110th Infantry Regiment reinforced the 109th and managed to dig in. A German frontal assault was out of the question and the flanking operation was stopped by a tenacious and costly Russian defense. 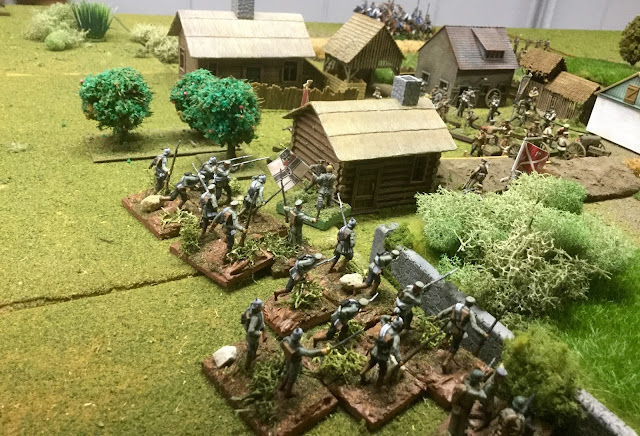 German high tide as they assault the fence line protecting Mallwischken. Note the struggle for the flag in the middle of the picture. The Russians would take away the flag trophy as both German battalions pictured were destroyed by rifle and machine gun fire supplemented by the artillery fire of the 28th Artillery Brigade. Russian units were noted for the their defensive abilities. In MEM14 this is reflected in their ability to ignore [some] retreat markers. They are therefore, hard to dislodge especially in built up areas. 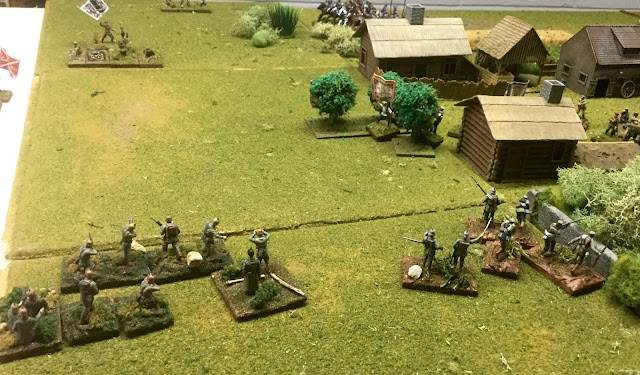 The Germans pull back after taking heavy casualities. Russian reinforcements included a sapper battalion and a regiment of mounted Cossacks. Cavalry was present on both sides but the Cossacks were the only unit to make a difference as they arrived to virtually guarantee the Germans would not take Mallwischken.

The figures for our WW1 armies comes from a number of sources. All fit into the 20-24mm range.

Metal figures are from ITS Miniatures and Irregular Miniatures available from Great Britain.

Plastic figures are the majority and are represented by Airfix, HAT, Zvezda and Emhar.

The strength of Command and Colors,  MEM44 or MEM14 is the card system. The game board is divided into three equal segments representing a left flank, right flank and center.

Each play has a "hand" of cards consisting of 5 or 6 cards. The cards determine actions. In order for the Germans to launch a successful left flank attack they would have to have a number of left flank cards to activate the units.

In other words your strategy depends on what cards you have and in what sequence you play them. A good offensive can sputter out as a player runs out of cards and must play a card for a different sector.

Casualties are taken through dice throws. Casualties tend to be high especially when units can be grouped but this reflects the period very well in my opinion. The dice also provide another fog of war element just as any dice system does.

In this game the Germans fielded the better part of the German 1st Korp of the Eighth Army while the Russians fielded a division. Despite the large number of units involved the game it was played out in well under 4 hours.

The Battle of Gumbinnen_2 is being researched and planned.