My plan is to play out the destruction of the Hicks disaster in the Sudan on September 30. The pictures below are roughly the initial set-up for the hapless Egyptians.

The savage attack by forty thousand screaming dervishes had smashed into the Egyptian column in the forest of Shaykan, Kordofan Province, in the western Sudan, that morning, 5 November 1883. Hicks’s force had been moving tactically in three ragged squares, one up and two back. The leading square had buckled instantly under the onslaught. The riflemen in the flanking squares were so exhausted and racked with thirst that they could hardly focus. They had wheeled and fired blindly into the mêlée, killing their own comrades as well as the enemy. 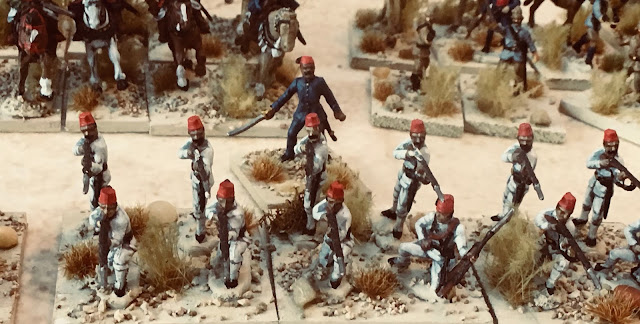 Posted by Bruce Roeder at 7:49 PM No comments:

This is the fourth game in the series in which I am adapting a Command and Colors Ancients  (CCA)scenario to play with my modifications to DBA 1.0.

The game was played on a 36" by 36" table. Converting the CCA game pieces to match elements in my DBA system was not exact but fairly close.

Here is the historical summary from the CCA scenario author (Joe Bisio):

“When the Celts reached the vicinity of Telamon in Etruria, their foragers encountered Atilius’ advanced guard and were captured…This news astonished Atilius but also raised his hopes, because he believed he had trapped the Gauls between the two Roman armies while they were on the march…By a fortunate chance he had noticed some high ground which dominated the road the Celts had to pass, and so taking the cavalry with him galloped forward, as he was anxious to occupy the crest of the hill before the Celts came up….”

“…The Celts at first knew nothing of Atilius’ arrival (from Sardinia), and supposed that Paullus’ cavalry must have outflanked them during the night and were occupying positions ahead of their line of march. They therefore immediately sent out their cavalry and light armed troops to oppose the move to occupy the hill. But they soon learned of Atilius’ presence from a prisoner who was brought in. At this they hastily deployed their infantry so that the army faced in both directions, to the front and the rear….”

“…Meanwhile Paullus had received news that Atilius’ legions had landed at Pisae, but had never supposed they were so near him. However when he saw fighting in progress round the hill it was clear that the other Roman army was close at hand. He at once sent forward his cavalry to support Atilius’ attempt to capture the heights; then he drew up his infantry in their usual order and advanced against the enemy who barred his way. The Celts had posted the Alpine tribe of the Gaesatae to face their rear, the direction from which they expected Paullus to attack,…on their front, to meet the attack of Atilius’ legions, they had stationed the Taurisci and the Boii who came from the northern bank of the Po. Their waggons and chariots had been placed at the end of either wing, and the spoils they had captured had been collected and placed under guard on one of the neighbouring hills, This Celtic order of battle which faced both ways was not only awe-inspiring to see but was also well suited to the needs of the situation….”

“….At first the conflict was confined to the fighting round the hill, and because of the great numbers of cavalry which were locked in battle the rest of the three armies stood by and watched the contest. In this encounter Gauis Atilius lost his life, fighting with desperate courage in the thick of the action, and his head was brought to the Celtic King. But the Roman cavalry fought on stubbornly, and at length overcame their opponents and took possession of the heights. By this time the infantry were almost in contact, and the battlefield provided a strange and marvelous spectacle…”

“…In the first place, as the battle was fought between three armies, it is clear that the appearance and the movements of the forces must have been strange and unusual in the extreme. Secondly a spectator must have asked himself-as we do to this day-whether the Celts were in the more dangerous position with the enemy advancing upon them from both sides, or in the more favourable one, because they could fight both armies and had their rear protected from each, and above all because they were completely cut off from retreat or from any possibility of escape if they were defeated; for this is the peculiarity of adopting an order of battle which faces both ways.”

“For their part the Romans felt encouraged at having trapped the enemy between their two armies, but at the same time dismayed by the splendid array of the Celtic host and the ear-splitting din which was created. There were countless horns and trumpets being blown simultaneously in their ranks, and as the whole army was shouting their war cries, there arose such a babel of sound that it seemed to come not only from the trumpets and the soldiers but from the whole surrounding countryside at once. Besides this aspect and the movements of the naked warriors in the front ranks made a terrifying spectacle. They were all men of splendid physique and in the prime of life, and those in the leading companies were richly adorned with gold necklaces and bracelets. The mere sight of them was enough to arouse fear among the Romans, but at the same time the prospect of gaining so much plunder made them twice as eager to fight.”

“However, when the Roman javelin-throwers, following the regular tactics of Roman warfare, advanced in front of the legions and began to hurl their weapons thick and fast, the cloaks and trousers of the Celts in the rear ranks gave some effective protection, but for the naked warriors in front the situation was very different. They had not foreseen this tactic and found themselves in a difficult and helpless situation. The shield used by the Gauls does not cover the whole body, so the tall stature of these naked troops made the missiles all the more likely to find their mark. After a while, when they found themselves unable to drive off the javelin throwers who were out of reach and continued to pour in their volleys, their nerve broke under the unbearable ordeal. Some of the men rushed forward in blind fury and threw their lives away as they tried to close with the enemy, while others gave ground and fell back step by step into the ranks of their comrades, where they created confusion since they were evidently backing away from the enemy.

In this way the martial ardour of the Gaesatae was broken by an attack of the javelin. However, when the javelin throwers stepped back into the ranks of the infantry and the whole Roman line advanced upon the enemy, the Insubres, the Boii, and the Taurisci met the charge head-on and held their ground in fierce hand to hand fighting. Although the tribesmen were almost cut to pieces, yet they stood firm and proved that they were equal to their enemies in courage, and inferior only in their weapons, in which the Romans had the advantage, both individually and collectively. The Roman shields, I should explain , were far better designed for defence, and so were their swords for attack, since the Gallic sword can only be used for cutting and not for thrusting. The end came when the Celts were attacked by the Roman cavalry who delivered a furious charge from the high ground on the flank; the Celtic cavalry turned and fled, and their infantry were cut down where they stood.”

“Some 40,000 Celts were killed and at least 10,000 taken prisoner, among them their King, Concolitanus. The other King, Aneroestes, fled from the battle with a few followers, and found a refuge where he and his whole retinue took their own lives. The spoils and trophies of the Celts were collected by the surviving consul, Lucius Aemilius Pallus, who sent them to Rome…” 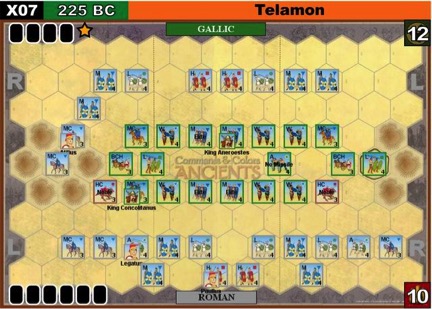 Gauls win if they can destroy 10 Roman elements, 5 of which have to come from Atilius’s command. The Gauls lose when they lose 9 elements

Some of the modifications to the basic DBA system was giving the Gauls a number of Bd's. I believe that in general the Celts would have had a core of well armed warriors and in this situation (being trapped) they would have had plenty of incentive to fight fanatically. Bds reflect the better armed as well as a degree of fanaticism.

Another innovation is the use of Ps. An element of Ps can be attached as a sub-unit of another infantry element but not another Ps (at least not in this game). The supported element receives a plus one to their CF. If the element is destroyed then so are the Ps but the Ps do not count toward core units destroyed.

In this game two elements of Wb could be stacked to give the Wb a plus one to it's CF if the Wb initiates combat.

The bottom line in all that is to try and make the game a bit more interesting in a historical simulation rather than in a competitive style game that DBA was designed for.

We played the game in about two hours. Given the fact the Gauls were hemmed in by three Roman armies they didn't have much of a chance. In tinkering with the play balance we managed to get a 9-4 game result with the Romans destroying 9 elements while losing 4.

My friend JZ played the Gauls and he said they had a shot and that a 40% chance of a win was possible. We were both satisfied with play balance.


Posted by Bruce Roeder at 7:10 PM No comments: