DBABR stands for DBA followed by my initials. DBABR bears little resemblance to DBA 3.0 as my version evolved from a solo version of DBA 1.0 authored by my friend Jim. I simply added a few things like double sized elements for the purposes of looks and some morale rules to avoid endless recoils. If you are interested in the changes you can find them at this link-An Explanation of DBABR

I prefer doing historical battles when possible and generally use the excellent maps found at Command and Colors Ancients map scenarios.

In the case of this game I used  the Don Clarke's Marathon variant found at the site. I convert the CCA counters to corresponding DBA elements. My friend Mike who supplied all the figures for the game set up his table and we played the game.

The letters in the OB refer to morale. L is for levy, O is for ordinary and V is for veteran.  Morale is tied to the number of recoils a unit can endure before destruction. The other standard rules for destroying elements still apply.

Note:We decided prior to the game to play the center Greek in single rank since historically that's what they did. In the game this closed the gaps on the map. Although we use the maps we do adjust somewhat for the game board and\or historical reasons. Nevertheless, the maps are excellent templates for a historical battle.

The distance between the two armies was reduced from our usual 18" to 12" to facilitate the surprise charge by the Athenians. The full die rolls for movement pips also helped the Greeks to close in a more coordinated fashion.

Note: The CCA categories do not translate perfectly to DBA elements, so educated, subjective guesses had to be made.This was a difficult game to have play balance. When I set up a historical scenario I want to use what history I can but at the same time give the side with less advantage at least a 33% of achieving victory. In this case that was very difficult to do given there was no room for the Persians to maneuver, the distance between the battle lines was only 12" and the Greek morale was vastly superior to the Persian. All these modifiers were in my opinion accurate but probably reduced the Persian side's ability to win to 16% rather than my rule of thumb 33%.

Nevertheless, the game was a lot of fun and the result very historical and the beer tasty!

I will use the pictures below to explain some the action. 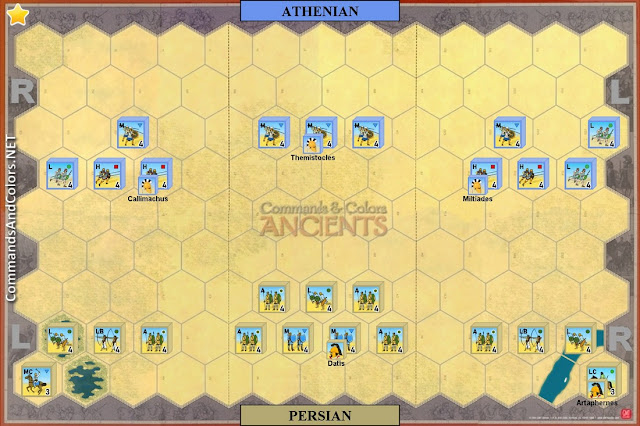 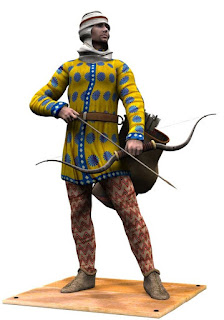