Skirmish at a Natal Farmstead

Keeping up with my blogs can be a challenge. All that to say is that this one has been sitting in "draft" mode for over a month.

The game was part of a campaign I call, The Sun Never Sets. I'm sure I stole it from somewhere but don't remember where.

The backstory assumed the Zulus were successful at Isandlwana and Rorke's Drift. After Rorke's Drift the Undi Corps continues on into Natal.

Chelmsford is making his way back to Natal. In the meantime British and Colonial forces are spread thin while the Undi Corps rampages around.

In this case a British force of 24 points faces a Zulu force of 30 points. The Empire forces are clustered around a walled farmstead.

Both sides had freedom of action to a point. The Zulu's needed to accumulate supply. This was done by occupying the mealie fields and the cattle herd. A major victory would have entailed eliminating the British force and looting the farmstead.

The British were supposed to interfere with the Zulu project.

The rules used were The Men Who Would Be Kings. Leadership for each unit was rolled for and two of the three British Foot units received poor leaders that significantly reduced their small arms range. Only the Highland unit was in tip top form.

Of course the Zulu's did not know this and besides they had some poor units as well.

It's fair to say that the leadership roles affected the British player to the extent he was very cautious; making little attempt to leave the walled farm and interfere with the Zulu's supply gathering expedition.

The Zulu player fearing a repeat of Rorke's Drift decided to mask the farmstead and sweep around the flank in order to find easier pickings.

From a campaign point of view it was interesting as each player played a personality as they saw fit. Had it been a one off type game it would have been the type of game I'd call a "cost benefit analysis" type game.

This means how many Zulu points does it take to eliminate however many British points are in the game.

I suspect that many gamers play the rules along those lines and I understand since the rules lend themselves to a Hollywood type game. (There is no insult in that.)

The game had to be judged in a different light. Would the Zulu king be happy with the Undi Corps continued rampage? Would the Colonial Government be happy with the British officer in charge as he allowed the Zulus to continue on? Those kind of questions go beyond a "one off" type game when the cost-benefit analysis victory conditions apply.

The British officer was in fact chastised and the Highland unit removed from his command. It's expected he will seek to train his officers to be a bit more effective for the next round.

The Zulu player has to also face political considerations. He wasn't supposed to be in the Natal in the first place. His success makes the Zulu king nervous but the Undi Corps loves Prince Dabulamanzi  kaMpandeand   is happy to follow him into Natal!

Here's some pictures of the action and non-action. 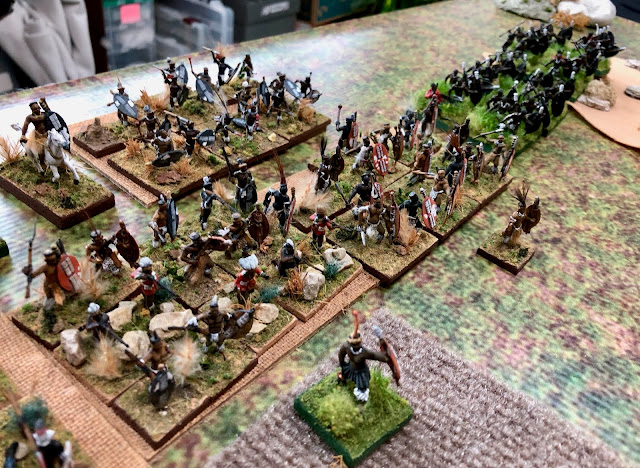 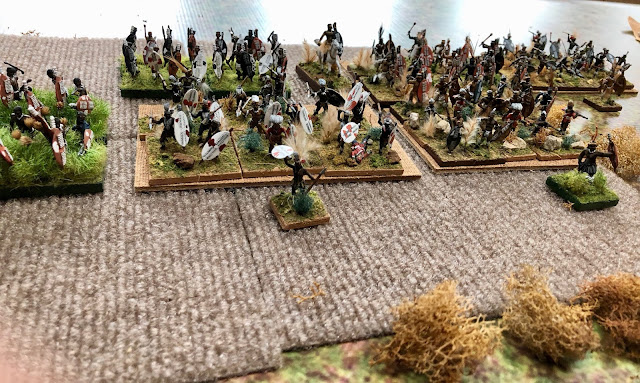 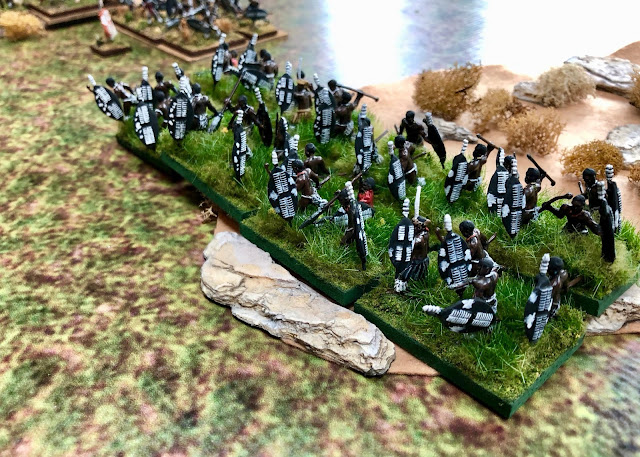 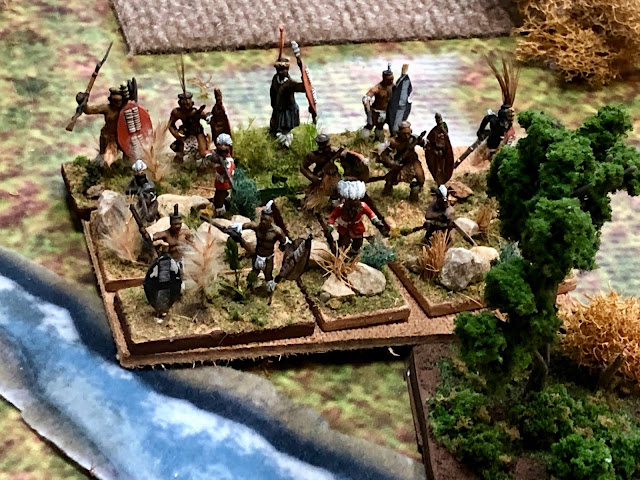 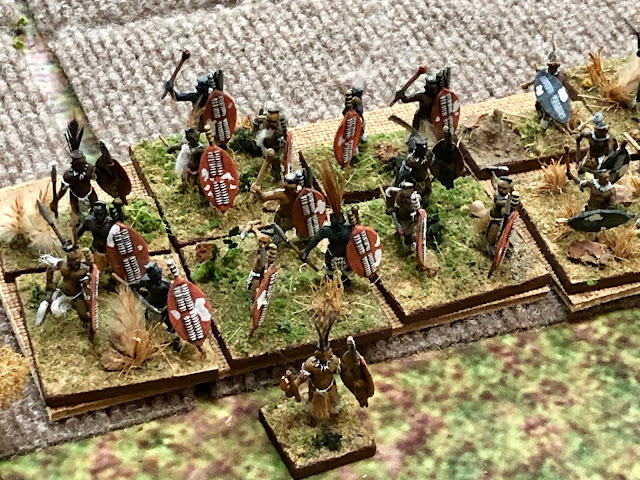 I'm mulling over the suitability of skirmish type rules in a campaign that has a strategic dimension. In other words my plans for The Sun Never Sets may be a bit grandiose and not conducive to a good game. Both players did a fine job of role playing but it made for a rather dull game, although it was very pleasing visually. Food for thought for next time.
Posted by Bruce Roeder at 9:23 AM 8 comments:

We recently played out the Battle of Ephesus, a battle between the Greeks and the Persians. The scenario was taken from Command and Colors Ancients. (Thanks to Jim Duncan the author of the scenario.) The rules used are my version of DBA which I call DBA_BR. My previous post explains many of the house rules that go into my version.

Here's the map and historical background and CCA map for the battle:

Historical BackgroundIn 499BC the tyrant of Miletus, Aristagoras, persuaded the Ionian Greeks to rise in rebellion against their Persian ruler King Darius. Darius placed Miletus under siege while Aristsgorus sailed to Greece to enlist the support of Athens and Sparta. The Spartans refused, but the Athenians sent 20 ships along with 5 ships from the city of Eretria who owed a debt of gratitude to the Milasians for their help in a former conflict. The ships landed at Ephesus and an allied army of Athenians, Eretrians and Ionians marched on the Persian regional capital of Sardes under the command of Charopinos, the brother of Aristagoras, and Hermophantus a man from Miletus. The Greeks easily captured Sardes and drove the regional Satrap, Artaphernes, into the city citadel. The approach of a large Persian army, probably the one that had been besieging Miletus, forced the Greeks to retreat back to Ephesus, but the Persian supremecy in cavalry meant the Greeks were caught and forced to turn and fight. The outnumbered and mainly infantry Greek army was heavily defeated with the Eretrian general Eualcides being killed. The Athenians retreated to their ships and then back to Athens. The Ionian revolt would rage for many more years and was eventually crushed in 494BC. Darius never forgot the aid the Ionians received from mainland Greece and he determined that Persia should exact its revenge in the future.

The game was a lot of fun and unusual given that it was historically set so early in the contest between the Greeks and Persians. All the miniatures were provided by my friend Mike while I designed the scenerio.
Posted by Bruce Roeder at 3:46 PM 5 comments: