This game was fought out by MS and JZ both contributors to this blog. All models pictured are from their collections. Battle Report, pictures and map by MS.

Map of the Battle 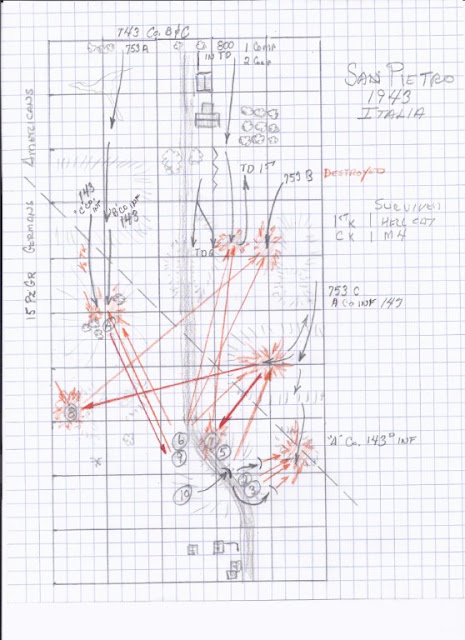 Game Summary as the reader views the map:

The center was engaged first and destroyed, and then both flanks enjoyed some minor success but then they too were stopped by the superior German marksmanship of the day.

The terrain was covered with hills and valleys dotted with small woods and farms with a dirt road down the middle. Two large, tree topped ridges dominated and marked the front lines, both under U.S. control.

Following the front line, on the far left was 71st Ko A in a small woods on the reverse slope of a large hill. 200m behind was #8 Pak 40 in a hull down position behind a small rise, but in the open. The only other cover in the German held area was a hill with sever small woods that was traversed by the dirt road, there on each side of the road, in the woods, were the other two Pak 40’s, #’s 6 & 7. #6 was the center gun and the only one dug-in. Behind #6 were the two Ko’s of StuG, behind #7 was the Schwere Ko’s two ‘42s. In a small woods at the far end of the hill behind #7 were Ko’s 2 & 3 of the 71st.

The Americans attacked across the whole front. Both of their flanks were hidden/blocked by the hills and ridges leaving B Co 753 driving up the valley alone and in the open. At just over 500m range Pak guns #6 & #8 opened fire and after a short exchange of fire all three of B Co’s tanks were KOed. 1st Co. TD’s came up on their right to support but also lost an M10. At a score of 4 to 0, 1st Co’s M18 fell back out of the line of fire. (The crew decided it was time to leave. )

A Co 753 advanced to the top of the ridge. Two of the M4’s turned to face the Pak guns while the 3d M4 and A Co 143d continued North. TD Co 2, also advanced along the road to engage the Pak guns and on the US right all three Co’s had crested the ridge. C Co 143 was sent forward to secure the hill and were surprised by A Ko. After a short exchange of fire C Co was lost when a panzerfaust took out the halftrack. A Ko’s success was short lived when A Co 753’s M4’s and B Co 143 overran the understrength A Ko.

While the battle on the hill was taking place the M4’s of C Co 753 found their range and took out Pak guns #7 & #8 with direct hits on the guns. However the M10s of TD Co 2 were lost in the exchange as was an M4 from A Co 753 who fell prey to Pak gun #6 once it had crested the hill, overrunning A Ko.

The two StuG’s of 2d Ko now engaged the lone M4 of C Co. taking it out followed by another M4 of C Co who had been engaging the Paks.

A Co 143d tried for an end around but was first suppressed by mortar fire and then by Ko’s 2 & 3 who were later joined by the StugIII's of Ko 2.

While this was going on on the American left, the success of A Co 753 on the right drew the attention of 1st Ko Stug. and again a brief exchange of fire eliminated A Co 753.

After regrouping the Germans celebrated their victory, buried their dead, and then withdrew several kilometers, to do it all over again, before the inevitable rain of HE from the skies, which always follows a German victory.