In an army with many storied infantry brigades perhaps Hood's Texas Brigade of the Army of Northern Virginia is the most renown.

The brigade consisted of the 1st, 4th and 5th Texas and the 3rd Arkansas the only far west regiments in the A.N.V.

Prior to Fredericksburg the brigade included the 18th Georgia and Hampton's Legion Infantry. Both units went to other brigades consisting of units from their respective states.

By the time of Gettysburg General John Bell Hood had been promoted to Division Commander in James Longstreet's 1st Corps. The brigade was commanded by Brigadier General  Jerome Bonaparte Robertson.

Over the course of the war the brigade sustained a 61% casualty rate. At the surrender at Appomattox it numbered only 600 men having started the war with a strength of 3500.

Over the years I've painted quite a few ACW units and either traded them away or sold them. When I got back into ACW gaming with the Black Powder rules I decided to paint most of my units to represent something specific.

Below is my Texas Brigade at the time of Gettysburg. The miniatures are 99% Musket Miniatures in 22mm.

Posted by Bruce Roeder at 2:10 PM No comments:

Here are some pics from a recent Black Powder ACW game. It's my third game using the rules and I'm still getting used to the nuances but must say the game went well and I do like the rules as they reflect a Brigade\Regiment scale well in a fast moving game.

The scenario featured the equvalent  of only two two brigades on a side. The white paper markers, although ugly were used to ID the units since many of my units can be used in a generic fashion. One of the features of Black Powder is the encouragement to use the unit name when giving orders.

For example; "the 9th Ohio will rapidly advance to the fence line and deploy into line." I find that this sort of thing adds color to the game and since the scenario featured a historical OB it was right to use the historical names even if it meant to use the white papers to ID the units.

Posted by Bruce Roeder at 6:54 PM No comments:

My friend and I have a desire to use the popular DBA rules to play historical battles. This requires going beyond the 12 element maximum in a traditional DBA match up. The two battles that follow are our first attempts.

To assist us in the process I went to the Command And Colors Ancients (CCA) website and modified their scenarios and troop types to correspond with DBA categories.

We played two games one Friday afternoon to see how it worked and the results were quite satisfying.

The first game simulation was the The Battle of the Ebro 215BC.

The CCA scenario that we used was void of terrain so to make it a little more interesting we used DBA to dice for some terrain features.

There was bad going on the Roman side with two oasis' side-by-side. The oasis' did slow down the Roman advance but the two sides were too far apart to have them have an immediate effect on the fame. (We should have used the 3' by 3" for 22mm-24mm figures.)

The Carthaginian right flank was anchored by a rough going hill.

In this battle we simply used the map to determine the order of battle and each player was free to deploy as they wished. The Carthaginians out scouted the Romans so the Romans had to deploy first. The order of the battle is as follows:

Note that in our DBA games a general does not count as an element. We played that the destruction of 5 elements would determine the winner.

I'll attempt to describe the action with the captions on the pictures.

The second game was The Battle of Cissa in 215BC.

In this case the CCA map gave the Carthaginians high ground to hold so we played the game that way.

We played this one straight since the high ground seemed to be the historical objective and the Carthaginian general was content to try and hold it. The forces were deployed more or less like on the CCA map.

We made a rule that if the Romans ever had more units on the high ground than the Carthaginians it would count as an additional two elements destroyed. The Romans managed this and won 6 elements to the Carthaginian 3.

We both counted the games as a successful experiment in using DBA for the historical match ups of the armies but also using historical scenarios provided by Command and Colors. We can't wait to try it again.

Posted by Bruce Roeder at 6:54 PM No comments: 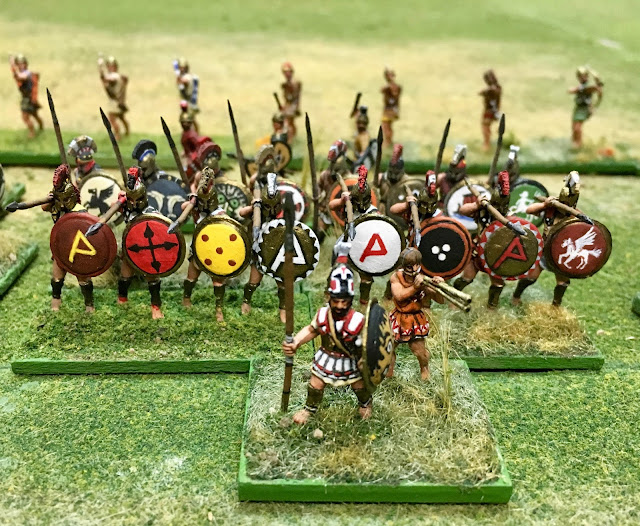 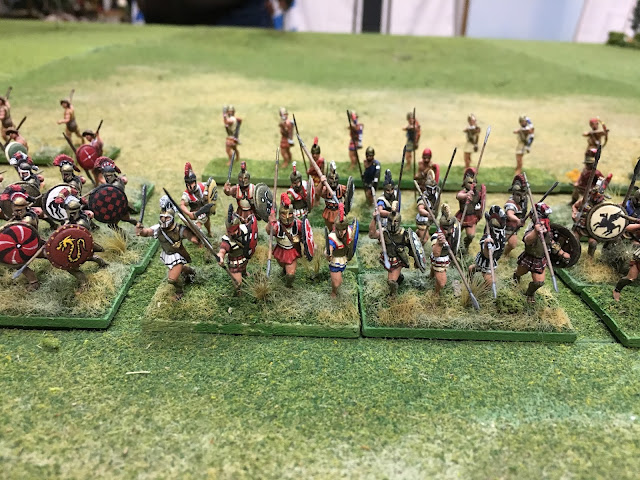 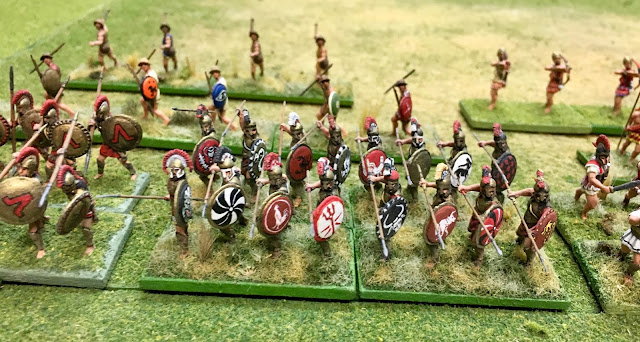 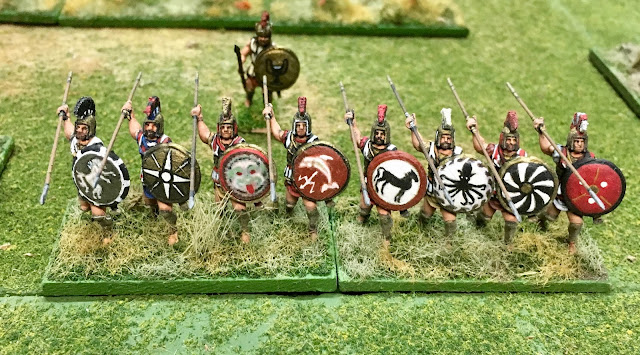 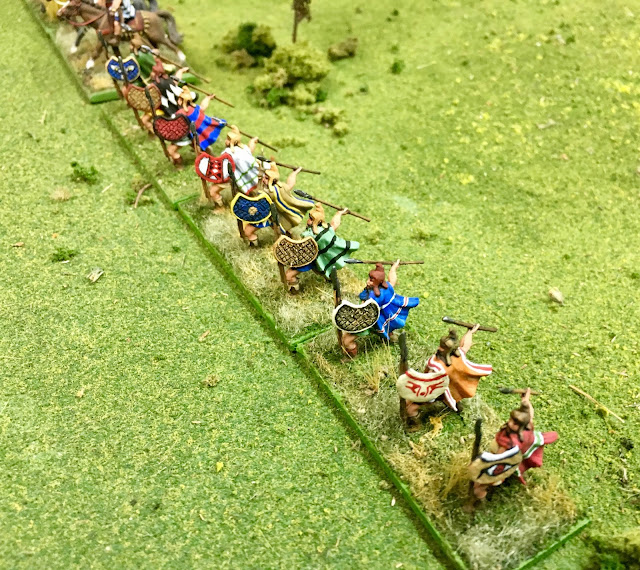 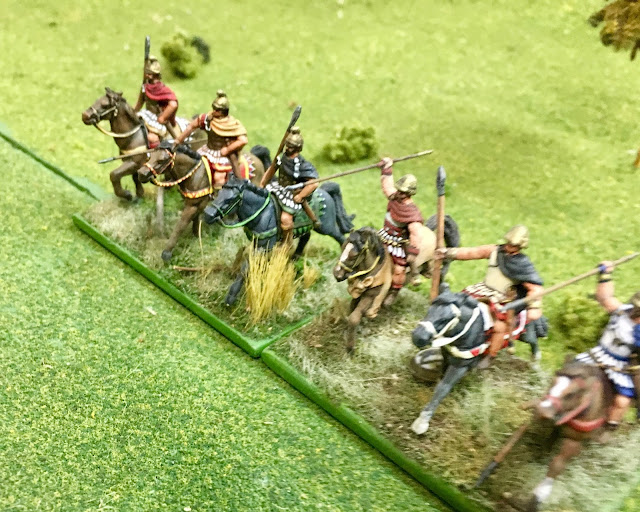 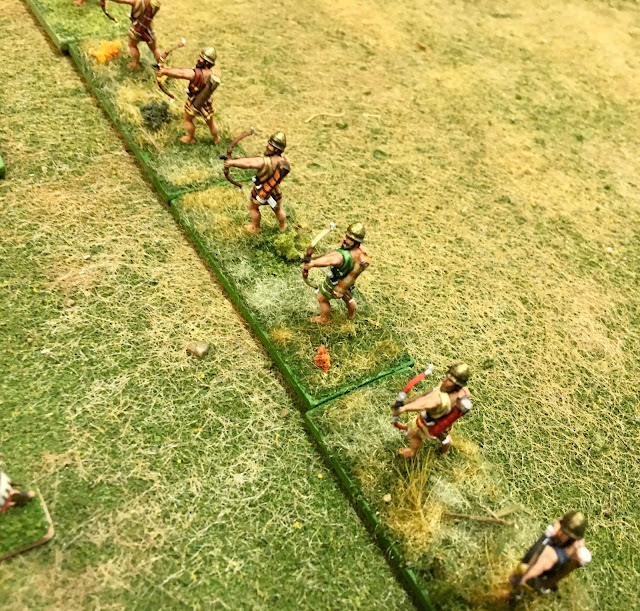 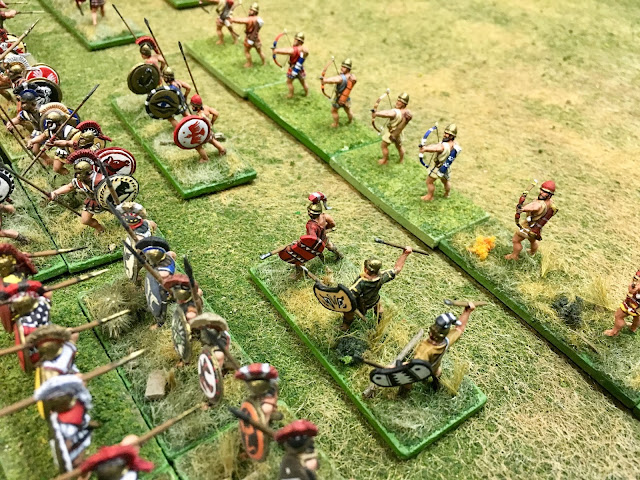 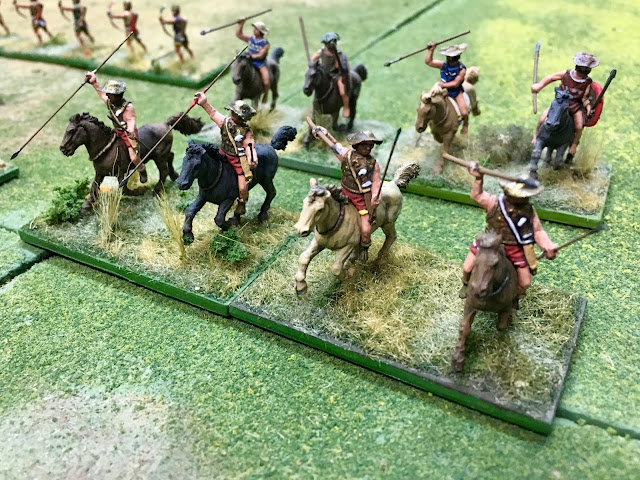 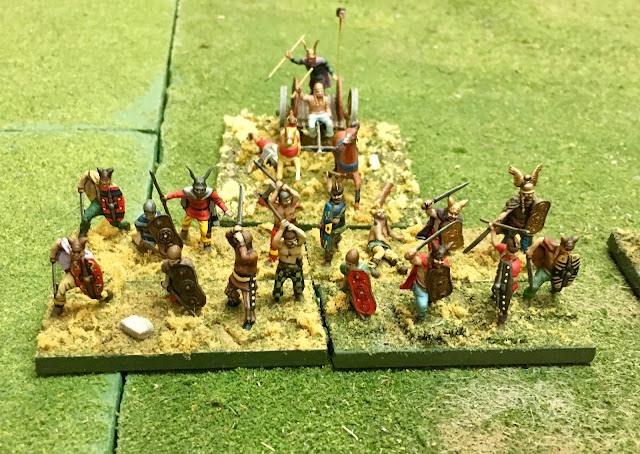 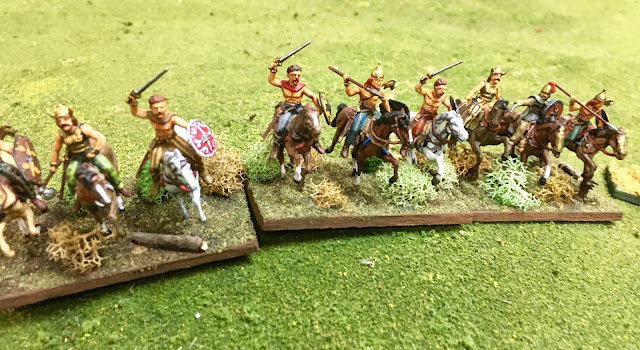 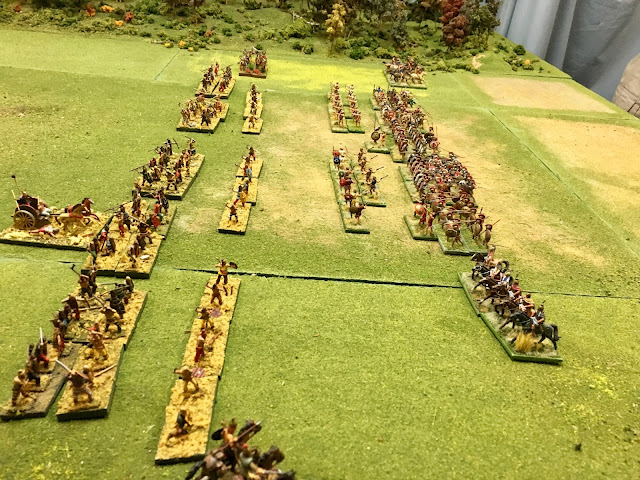 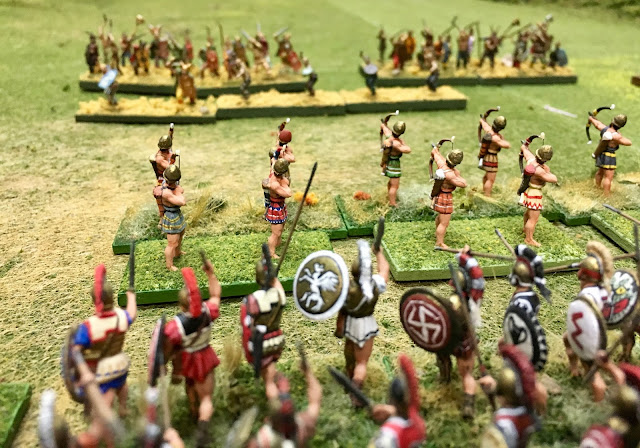 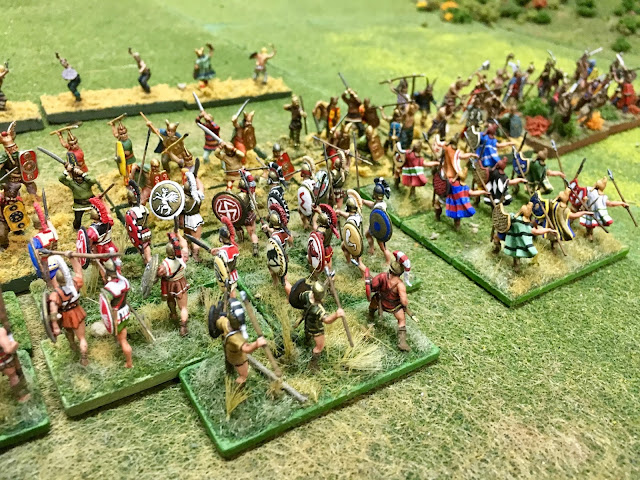 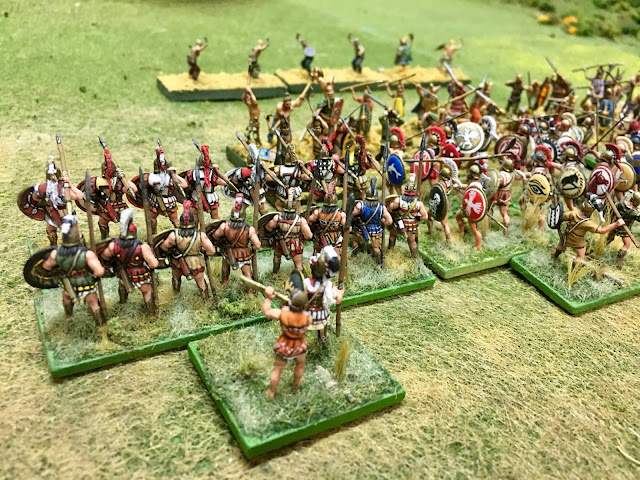 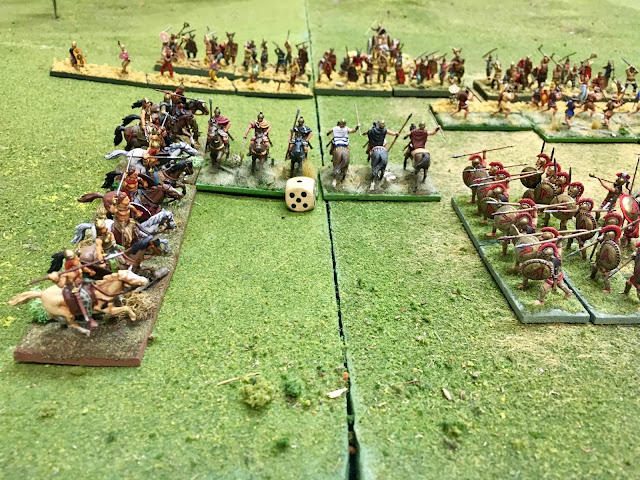 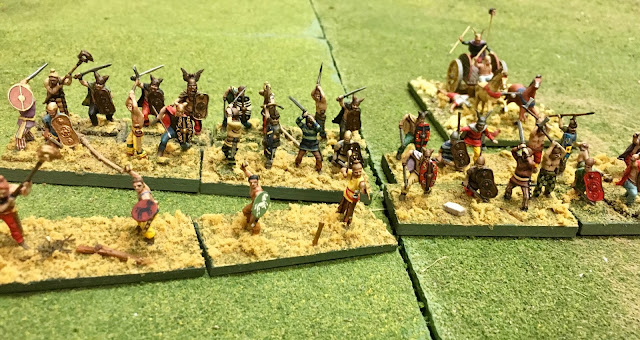 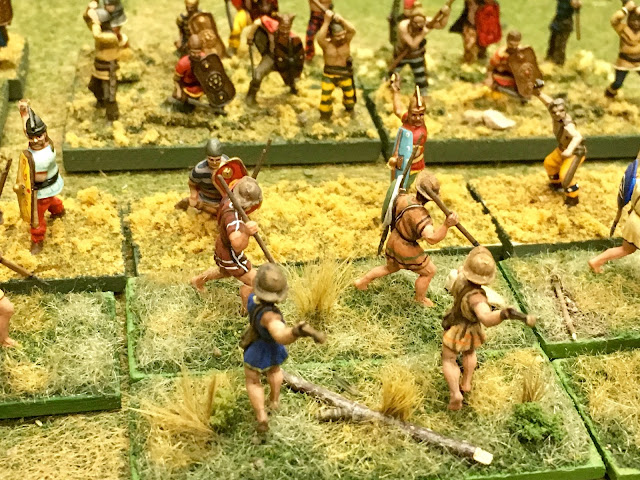 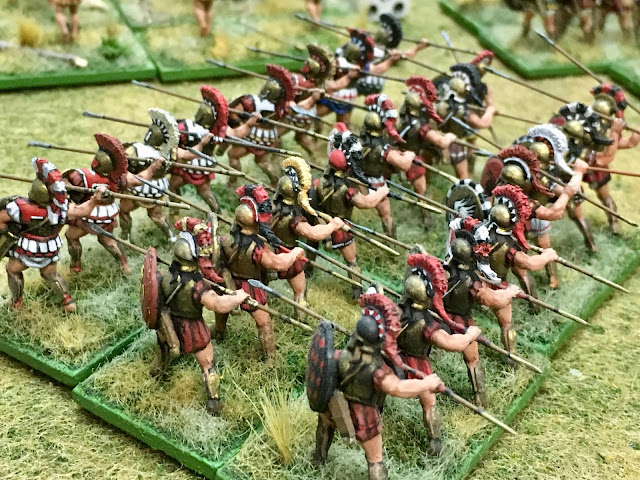 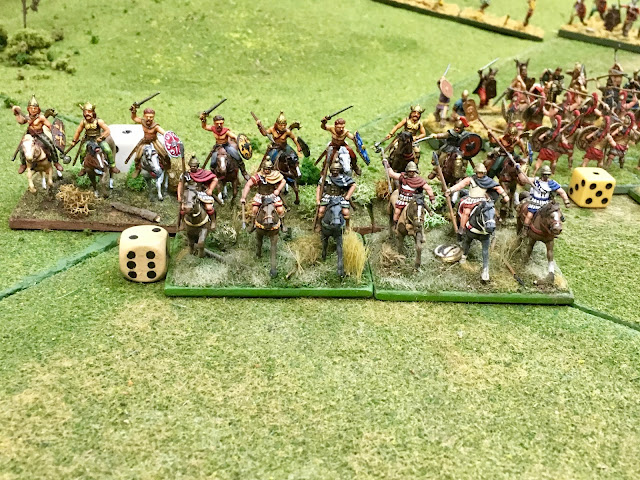 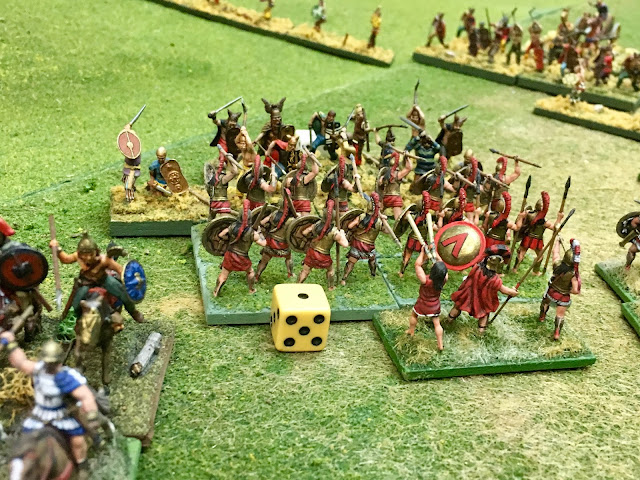 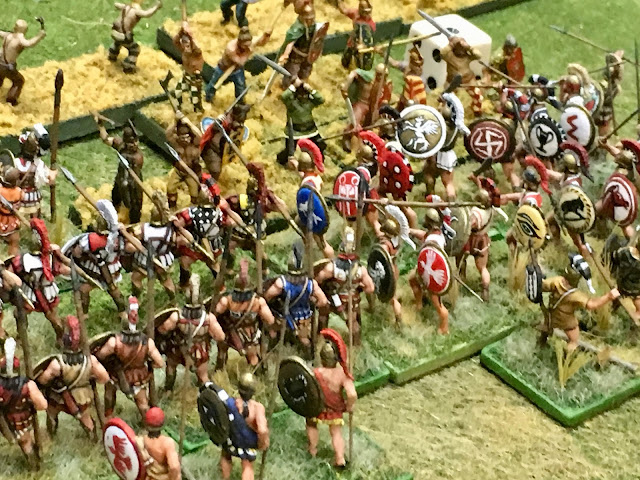 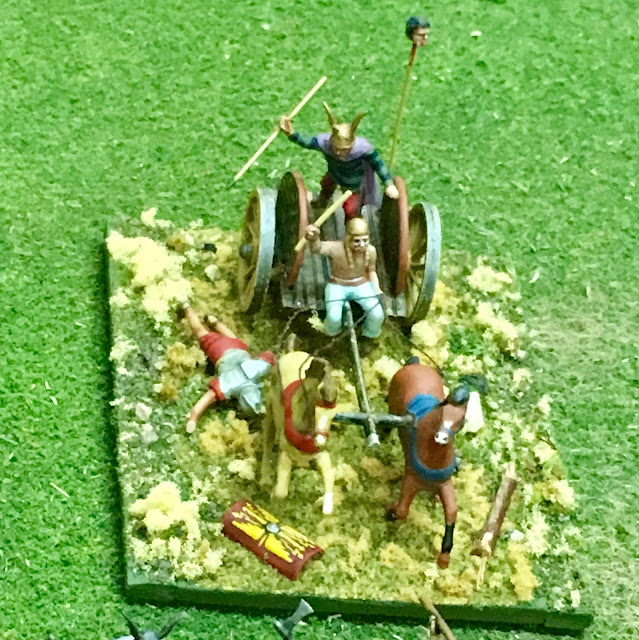 Posted by Bruce Roeder at 3:34 PM No comments: