The rules used in the game were The Men Who Would Be Kings by Daniel Mersey and Osprey Publishing.

Below is a screen shot of the scenario (although hard to see I admit). The OB was modified slightly and both sides had 8 units. The Imperial forces are in red and the Zulus gray. The major terrain features were the the hills (upper right corner and conical hill center right)>

Based around the large hill in the upper right corner: 3 units of assagai (16 figs each), 1 unit of obsolete muskets, 16 figs)

Based around the conical hill: 3 units of assagai (16 figs each), 1 unit of obsolete muskets, 16 figs) 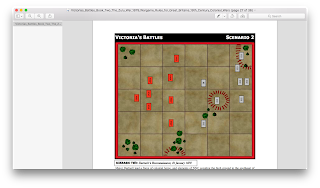 Major Dartnell lead a force of colonial horse and elements of NNC scouting the high ground to the southeast of Isandlwana. The force encountered a mass of Zulus late in the day and the two sides skirmished till dark.

Although a small affair the incident had consequences.

Lord Chelmsford had divided his column into two portions leaving Colonel Pulleine at the camp at Isandlwana with about half of the British infantry. Chelmsford took the other half after ordering Dartnell to reconnoiter southeast to where Chelmsford believed the main Zulu Impi was.

Dartnell believed he faced the main impi and made the risky decision to camp on the battlefield  after the skirmish while Chelmsford came up with his column. This took Chelmsford further away from Isandlawana  and disaster ensued.

From a wargame simulation point of view the initial skirmish presents a number of interesting “what if” type questions.

#1. What if Dartnell had pressed his attack and routed the local forces only to discover they were not the main impi?

#2. What if the Zulus disobeyed their orders to hold and pressed an attack upon Dartnell only to have Dartnell do a fighting retreat and thus confirm his impression that it was the main Zulu impi?

My interpretation of a what if was based on "what if" #1.

The Zulu’s gain nothing by attacking Dartnell but gain everything by holding the two high points and their board edge thus preventing Dartnell from discovering they are but a screen shielding the main impi on it’s way to Isandlwana.

For the British forces to “win” they must discover that the forces arrayed against them are light and thus have the opportunity to inform Chelmsford thus preventing him from pursueing a wild goose chase while the threat is the camp at Isandlwana.

If the Imperial Forces gain the small hill they have a 1 or 2 chance  (on a six-sided die)  of discovering how weak the Zulu force actually is. (They may roll for this every turn a unit is on the hill.)

If the Imperial Forces take the large hill even for a turn they automatically win.

Pertinent Notes on the Rules and Set up.

Zulu spear units may not cross the board center for that would disobey their orders to screen/defend and offer themselves up to British infantry headed in their direction. The  musket armed units may cross the center line.

Note: Although the spear armed Zulu units could not cross the center line they could charge across the line if an Imperial unit was within two inches of the center line. This occurred at least twice in the game. The board dimensions for the game were 7' by 4' so the center line was at the 2' mark.

The two hills were rough terrain.

A card activation system was used instead of the IGO-UGO system in TMWWBK. (house rule)

Leadership values were modified by the Leadership Traits section in the rules. That added another dimension to the game that was quite fun.

Brief Description of the Action

My initial plan was obvious and that was to string out the Zulu units so they had to cover their exposed flank. This created a nearly constant shift to their left flank as the small center hill became threatened.

The musket armed Zulu unit fronting the small hill was attacked via carbine fire by the one of the Native Horse units and then crushed by the disaffected Zulu unit. Some of MS's units had to shift while JZ's remaining units had much more frontage to hold.

The disaffected Zulu unit was destroyed by a counterattack while the Imperial horse units stayed at a safe distance until it became safe to charge pinned Zulu units.

On the large hill flank two of MS's Zulu units charged as the NNC and horse units got to within 2' of the center line. The horse successfully evaded while the NNC were destroyed after giving a good account of themselves. Both Zulu units had been weakened by carbine fire and rifle fire from the mounted infantry and eventually they broke.

On the Imperial right after the destruction of the disaffected Zulus other Zulu units attempted to come to grips with Imperial Horse as they approached the center line. They were largely prevented from charging home because of pinning and when one unit did charge home they were bested by the Natal Native Horse.

The net result of all these actions is that Zulu's could not cover all the ground between the hills nor on their more exposed left flank. The victory went to the Imperial forces not because of the casualties inflicted per se but because they would have discovered that the forces arrayed agains them were not the main impi and could have informed Chelmsford.

It was an unusual game with a lot of mounted units and no British infantry but a great deal of fun.

The pics are not in any particular order but I'll try to explain the action in each.

Email ThisBlogThis!Share to TwitterShare to FacebookShare to Pinterest
Labels: Colonials

As always thanks Phil for your encouragement. In retrospect I wish I would have taken more pictures but I was a player and game master and a bit busy! Thanks for stopping by.