The pictures below were taken at the second planned game of the Battle of Gumbinnen in 1914 in East Prussia that we are recreating on the tabletop. The first entry and explanation for the rules and how the first game went can be found here...Battle of Gumbinnen_1 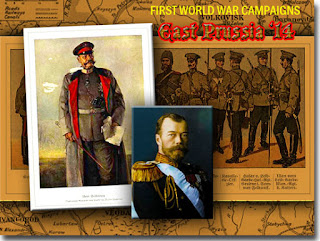 I divided Tiller's Battle of Gumbinnen scenario into roughly 3 or 4 equal parts with the intent of playing them out from north to south.

Each individual game would contribute to an overall victory score for the 3-4 battle campaign.

Historically the Germans were attempting a double envelopment. It failed, but in some ways served as a dress rehearsal for the amazing victory at Tannenberg a short time later..

One objective was the village of Brauponnen on the German left. The other objective was a slight rise on the Russian center left.

I will attempt to explain how the game went via the pictures below. Note that they are not in an exact order and that I really did not take enough pictures. 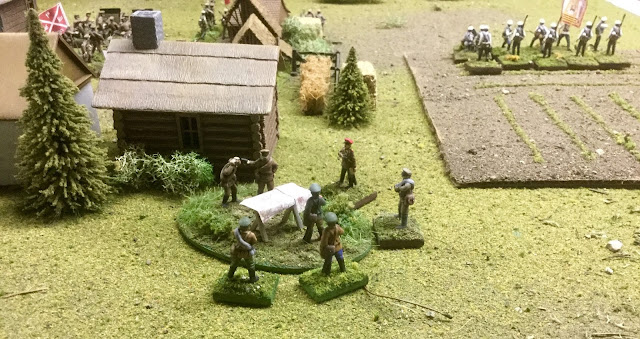 This vignette is the division commander and his staff of the Russian 28th Infantry Division. One regiment from the 28th was tasked with the job of holding Brauponnen at all costs. The figures are all from HAT. Note that the Russian officer in the upper center is holding a pistol to the figure holding his head. He is being told to hold the village or else. Retribution for failure was swift in the Czar's army! 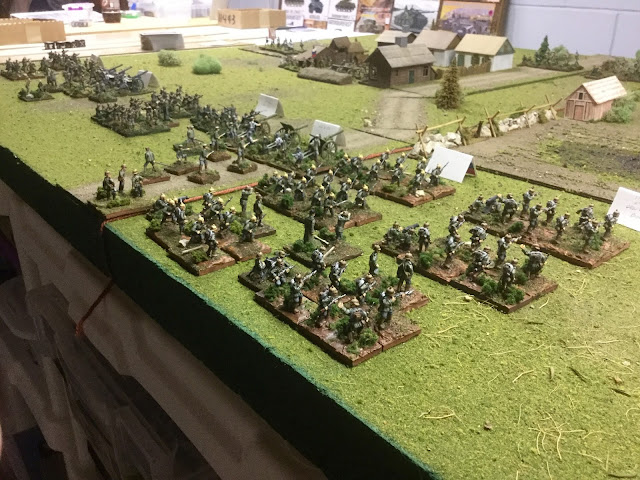 The above picture gives a good view of the German left and center left. The bulk of the elite 1st East Prussian Infantry Division has been concentrated to take Brauponnen. Two regiments of field artillery would support the landsers. The small white papers you see are regimental ids. In our games regimental morale and integrity are important and when you play on a corps level it's hard to keep them straight without good markers! The figures in the picture are plastic Airfix (furthest away) and Irregular and IT metal miniatures from England are closer. The artillery is HAT. 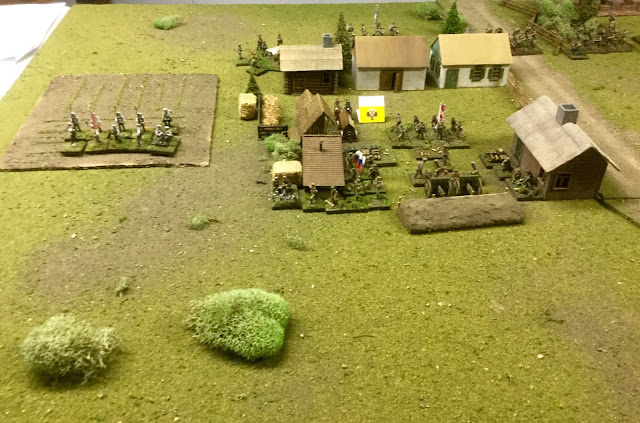 A nice shot of Brauponnen defended by 4 battalions of the Russian 112th Infantry Regiment of the 28th ID. Two battalions are deployed in the town with a brigade of artillery that represents 24 actual guns. Another battalion is to the rear of the town and one is deployed on the far Russian right flank. Period pictures show some Russian units continuing to wear the earlier white\gray uniforms that were in vogue ten years prior to 1914.  The unit in the field adjacent to the town is clothed in white\gray. Details like that provide a great visual and certainly break the monotony of earth brown! 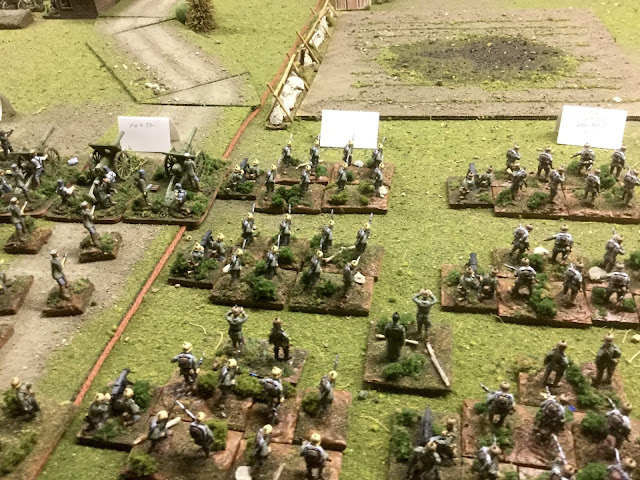 Close up of the German left\center. Three 8 fig units are a regiment of three battalions in the scale we use. The command figures in the center represent regimental and brigade commanders who do play a major role in the game. The center figure(s) are from the old Airfix set. The one with his hands in his pocket was affectionately known as "Hindenburg" during the game.

This view looks across the board from the German left\center. Te defenders are from the Russian 29th ID. They are spread thin and most would be called upon to reinforce their comrades in Brauponnen. The figures are HAT and Streletz. 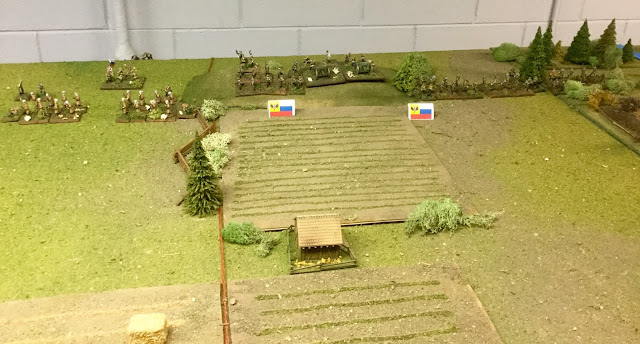 This view looks across the field of battle toward the Russian left\center. A regiment from the 29th ID holds the high ground with a brigade of artillery. They would still be there at the end of the game! 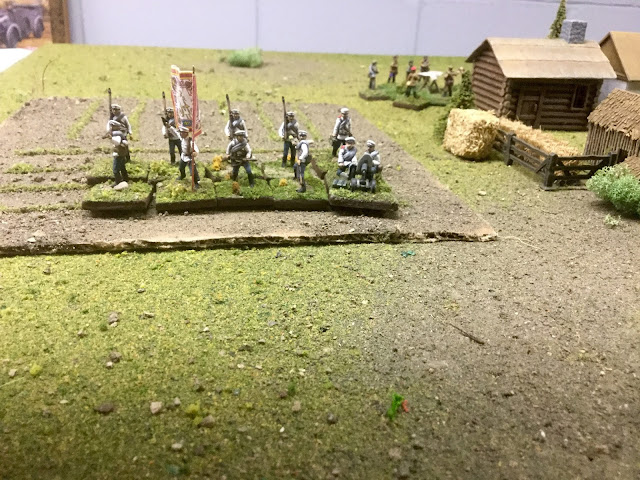 A close up of the Russians from the 112th IR in their white\gray uniforms. I like that unit, hence the close up. Figures are HAT and painted by my friend JZ who contributes to this blog. 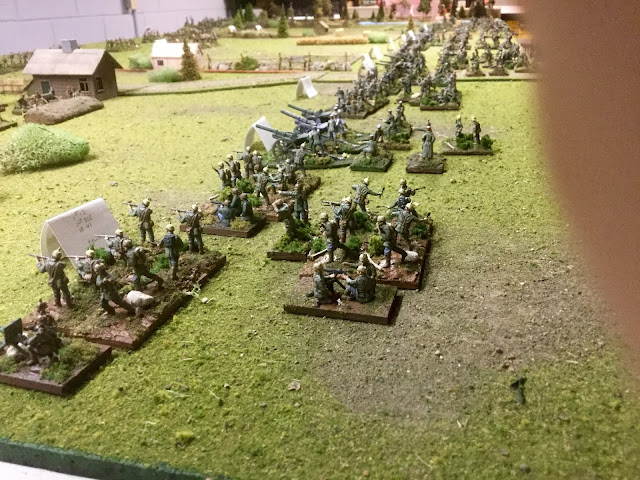 This pic shows the German battle line from the German left to the far right. The figures are Airfix. The Koenigsberg Landwehr consisted of the German right. Ordinarily, the Germans would not have fielded Landwehr or Ersatz units but they were hard pressed by the early Russian offensive into East Prussia. On the other hand the 1st East Prussian ID pictured here was considered one of the top German divisions in the entire army. It was quite a contrast in the game. The German player was my son JR. I served as judge and combat photographer with my iPad so please excuse the the clunky thumb print! 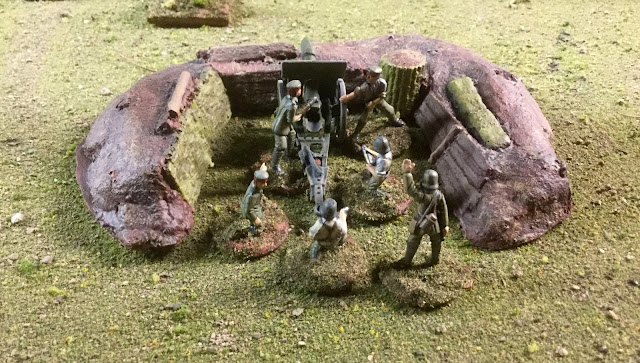 Both sides had access to "off board" heavy artillery represented on the board with displays like this one. The gun is from Irregular Miniatures and their Really Useful Guns range. It's a 150mm howitzer. The crew members are HAT. Two wear the 1916 helmet but I was not that picky in putting the display together, Besides, eventually we'll get to 1916 and beyond! The earthwork is from an unknown manufacturer and is made of plaster. 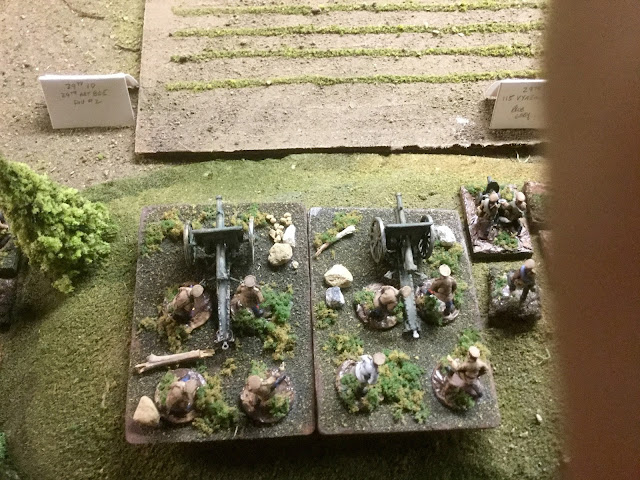 Russian artillery brigade deployed on the high ground. This unit would get into a counter battery duel with the Landwehr artillery opposite it. The Russians would get the better of the Landwehr and the Landwehr infantry would not advance without artillery support. Smart I think. 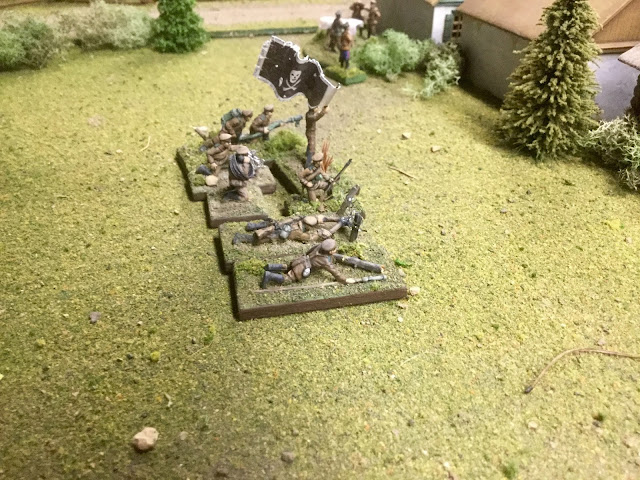 Scratch built Russian sappers. Russian pioneer units were in reserve and these arrived to support the infantry regiment in Brauponnen. Note the flag and skull and crossbones-quite common for pioneer units! The figures toward the top of the picture are a flame thrower team! Figures by JZ. 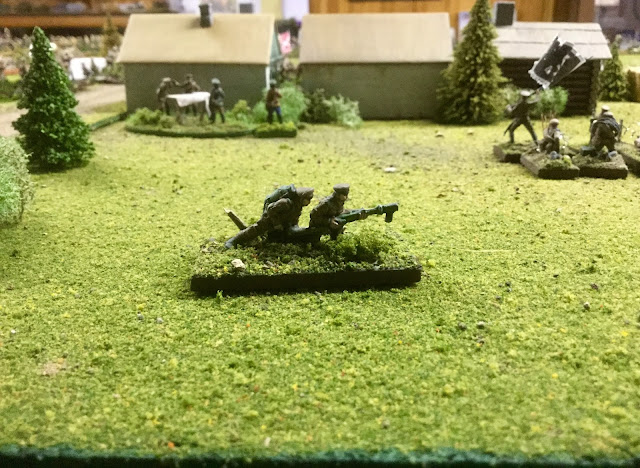 Close-up of the flame thrower team-scratch built by JZ. 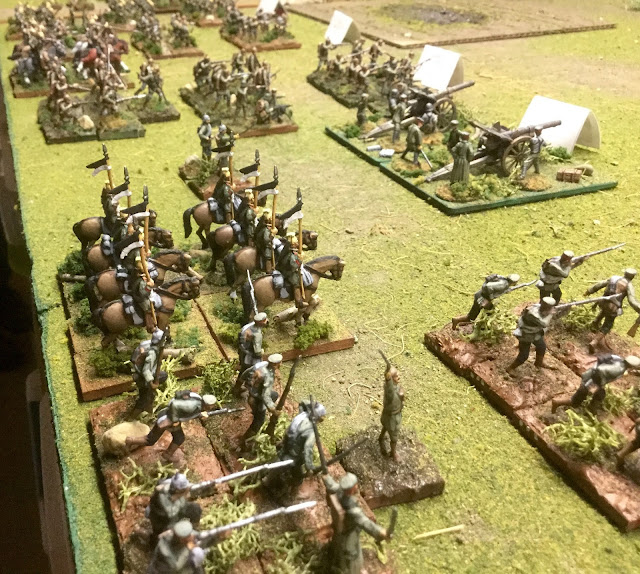 The German center-mostly Landwehr and Landwehr Uhlans. They did not advance because the German artillery was defeated by the Russian artillery opposite this force. The Uhlans are metal Irregular Miniatures and the infantry close up are Emhar figures from their Franco-Prussian range. I wanted a landwehr or landstrum look to the regiment so what better way than to paint up figures from the previous conflict! 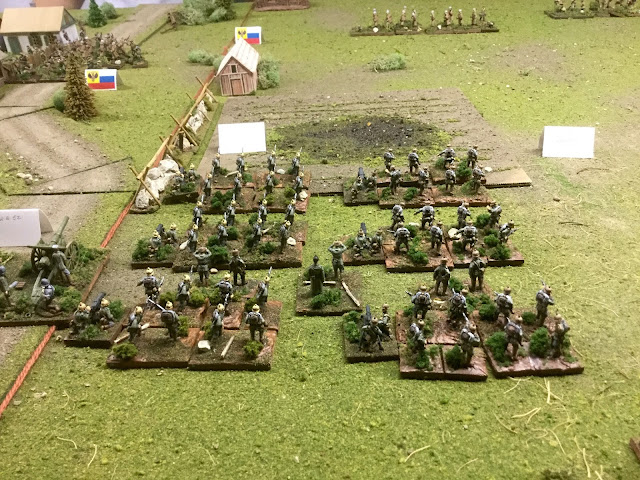 Two segments of the East Prussian 1st ID again. The muddy field bogged them down just enough so they could not support the third regiment just to their left who assaulted Brauponnen directly. The Russian player (JZ) commented that he thought if the Germans had one more turn Brauponnen would have fallen. Time was called however. It was a close game none-the-less with the Russians gaining 6 medals while the Germans gained 5. 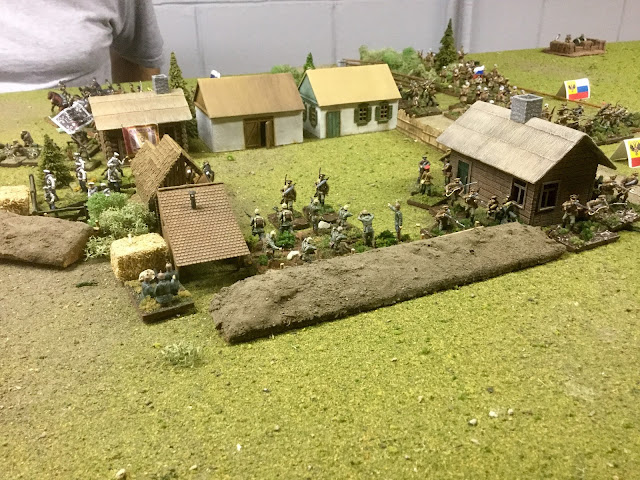 One battalion of the 1st ID did penetrate Brauponnen. The German artillery consisting of two full regiments had devastated the defenders prior to the assault making it possible for the battalion to enter the town. This unit should have received a medal even though they were destroyed in a Russian counter attack. The MG Co is taking cover behind a hay bale on the unit's right! 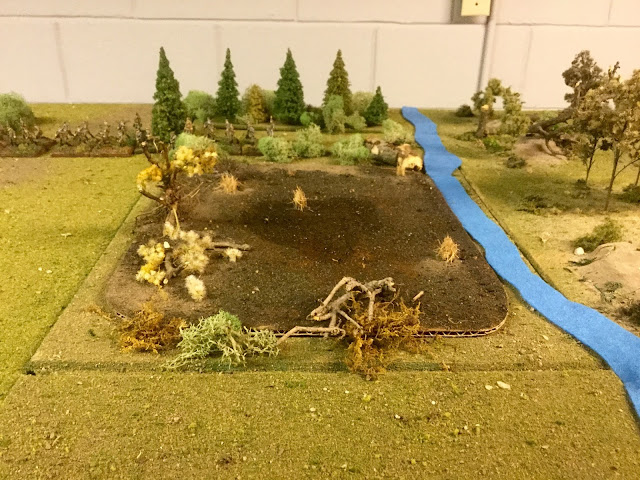 This neat swampy terrain feature was on the far right of the Russian front. There is no way the Ersatz units opposite it would ever cross in time! The river was the board boundary. 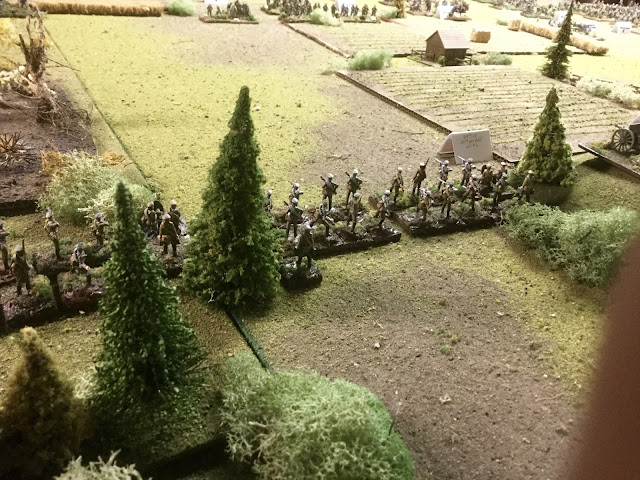 The Russian battle line on the Russian left. They are also from the 29th ID. The figures are HAT. 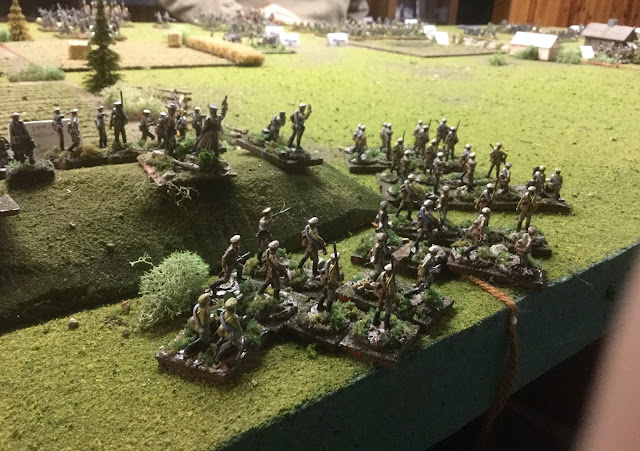 This is the leading regiment of Russian reinforcements from the 25th Livonia ID. The Russian commander wanted to advance against the landwehr opposite them but had to play his activation cards to defend Brauponnen instead. Historically, the Russians reacted well to the German attack and effectively checked the German offensive. 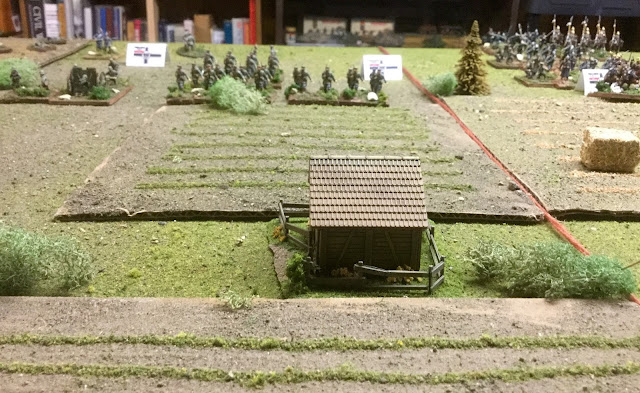 This shot was taken from the Russian center opposite the Landwehr. To the left of the picture is the remnant of the Landwehr Artillery Regiment that lost the counter battery duel with the Russian guns on the high ground.

So far in the campaign the Russians lead the Germans 11 medals to 8. I plan 2 more games in the Gumbinnen Campaign but that is subject to change. We play for fun and the history of it all so winning the campaign is secondary to those objectives.

This means that if the mood strikes me we could go beyond the 2 planned games and feature a few what if type scenarios. All this will preparatory work for the Tannenberg Campaign in the future.

Email ThisBlogThis!Share to TwitterShare to FacebookShare to Pinterest
Labels: WW1

Nice, very nice! Great details on the bases and vignettes, and splendid pictures!