The Battle of Salem Church or 2nd Fredericksburg

The Battle of Salem Church or 2nd Fredericksburg

In the spring of 1863 the Army of the Potomac opened it’s offensive against Richmond with a huge turning movement to unhinge Lee’s defenses overlooking Fredericksburg. The maneuver worked and Hooker took the Army of the Potomac across the Rappahannock River and into the tangle of woods known as “the Wilderness”.  At a point marked on the map as Chancellorsville Hooker came to a halt and promptly lost his nerve.

Lee responded by leaving only a covering force near Fredericksburg and turned to face Hooker. The result was one of the most startling victories of the war as the Army of Northern Virginia broke Hooker’s army. But Hooker had left the VI Corps under John Sedgwick to pin the Confederate forces. Realizing that the bulk of the Confederates had been drawn off Sedgwick’s men carried the high ground above the town on May 3rd, and then pressed on to join the rest of the army to the west. The Confederates withdrew before the Union advance and, once reinforced turned at Salem Church with the aim of destroying VI Corps. (From Black Powder. Glory Hallelujah)

The scenario was a composite drawn from a number of sources. The game scale was 22mm. or 1/72 and played out on a 8' by 4' table. Figures used were Airfix, Musket Miniatures, Italeri, Revell, IMEX and probably a smattering of other manufactureers. The rules used were an early version of On to Richmond with some modifications including organization. 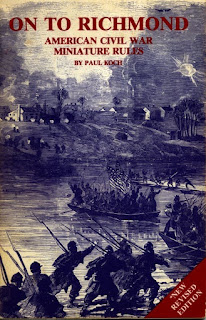 On to Richmond is based on a basic six (stand) element brigade. As the game organizer I divided a historical brigade into two "wings" thus creating two halves of a "demi-brigade. For example Wofford's Brigade or McLaw's Division had an "A" component of 6 stands and a "B" component of 6 stands.

I diced for unit ratings and commander ratings to add to the Fog of War aspect.

Since this was the first ACW game I was running in about 25+ years (with the assistance of JZ) I wanted a straight forward, stand-up fight to learn the rule basics. That's exactly what I got!

Because I was running the game I had not planned on taking pictures. About 1\2 of the way through I snapped 6 quick pictures with my iPhone-all from the Union side looking across at the CSA forces.